While everybody gave up on this dog, one woman showed courage and saved his life.

Kai is a Golden retriever who is 100 pounds overweight. His condition made it so difficult for him to walk that his family decided to put him into euthanasia. When the vet learned about the dog, he knew right then that the pup still had a lot of life in him although he admitted that he was the fattest dog they’ve ever seen.

But that isn’t enough reason to euthanize the pooch. The vet was positive that he only needed help to lose weight. 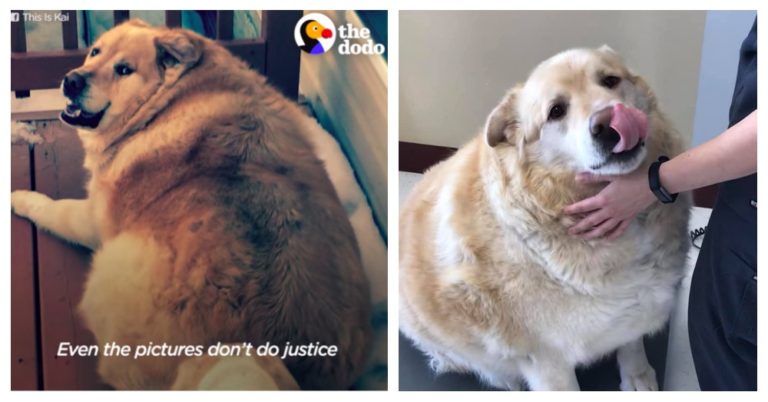 It didn’t take long before a woman named Pam Heggie met him and decided to foster the hound. She was determined to assist the dog and prove his previous owners that his condition isn’t hopeless.

In the beginning, the hound could only do five to ten steps, and Pam knew as a nurse that she needed to take it slow for Kai. He is too overweight, and moving was very hard. Still, Pam refused to give up on him.

She put Kai into a strict diet and a regular exercise. She did not allow treats, and she made him do short walks three times a day.

In the process, there were lots of failures met, which sometimes put Pam into tears as she saw the dog in pain. But later on, everything bore fruit.

When she began to put Kai into the water and made him walk in there, it improved his range of motion and built up his muscles. He gradually was able to move faster, and everything came easier.

After one year with this intensive program, here is Kai now!

Kai made his goal, losing 100 pounds, and on top of that, he gained a family. Pam finally decided to adopt him!

Indeed, good things happen when you don’t give up!

Don’t miss to share Kai’s story with your friends so they too could get motivation!

Dog Plays Fetch On Its Own

Shelter Dog Receives A Care Package From Her New Family

Dogs In Fort Bend Shelter Badly Need To Get Adopted Before...

Code red in animal shelters brings nothing but bad news. In Fort Bend County, some adorable dogs need to get adopted as soon as...

Dog Plays Fetch On Its Own

Obese Dog That’s About To Get Euthanized Is Saved By A...

Shelter Dog Receives A Care Package From Her New Family

This Dog Didn’t Know How A Bed Felt Like Until She...